Many of us who followed Le Tour this year saw the very definition of adaptability in action. With so many favorites dropping out of the races in the early stages to see super domestique’s take over as team leaders and surprise many with their ability to adapt to the new pressures as a team leader.

As a coach, I see adaptability often in many of my athletes who are very driven and don’t look at adversity as an excuse to quit but as an opportunity to try things differently.

Several athletes come to mind. I have an athlete that was putting in the work to become a top age group triathlete in his country and due to a work promotion could no longer make the time to train for 3 sports. This did not deter this athlete instead he chose to focus on just racing his bike. In just a season and a half, he has gone from a beginning road racer to elite status. This athlete hasn’t complained once about making the change and has completely embraced his new chosen sport and it shows.

I have another athlete who started working with me on Road Racing last season as a beginner and his form was coming along nicely and then was bitten by the Mountain Bike bug at the end of the previous season. While this athlete was becoming a very competent Road Racer he quickly discovered that he was a force in XC MTB and is often found on the podium on the weekends. This very same athlete ended up on the podium of the National Championships in his first year of racing XC MTB! (See Article Pic)

Several years ago after a brief layoff from road racing due to a surgery, I took up running and the same year I started placing high 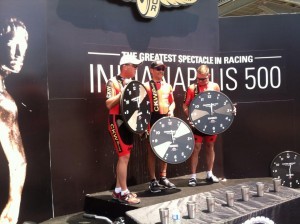 in the overall in my chosen distance the 5K. However, I loved racing bikes too much to give it up so on a whim I entered a Duathlon and podiumed my age group at a large Sprint Duathlon and 2 years later found myself finishing 9th in the South East Regional Championship for my age group. Since then I have had some running injuries and I have returned to Individual and Team Time Trial this year where our TTT took 2nd overall at Indianapolis Motor Speedway.

What it comes down to for all of these athletes and myself is we love to push ourselves, compete and are open to experiences and rarely let setbacks get in the way of forward momentum or fun for that matter.

So the next time you have a setback, injury, illness or job impacting your chosen sport remember that setbacks are temporary and that trying new things may show you a new path to success.