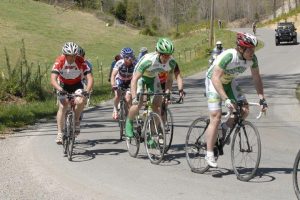 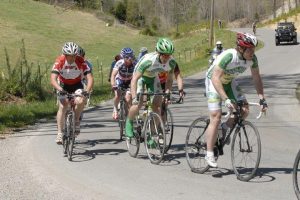 A friend of mine noticed on a recent race report that I had mentioned setting up a teammate to attack. He was wanting to know what went into this. I told him that it was pretty straight forward. Then I thought about all the different ways there are to attack. So rather then give away what type of attack was used in that particular race I thought I would post a few of my favorites.

Before I list my favorites you might or should be asking your self why should I attack in a race. Even better why shouldn’t I attack in a race. An attack is when a rider with or with out help will suddenly sprint away from the group he or she is with. These attacks are done primarily to peel off weaker racers, or those not paying attention and to possibly just possibly get away and stay away for a win. I have witnessed larger and more organized teams put one attack out after another to wear down an entire peleton with two or more riders in reserve so that they are but guaranteed a win at the sprint.

When one team attacks its inevitable that one of four things are going to occur.

Here are some of my favorite Attack tactics: 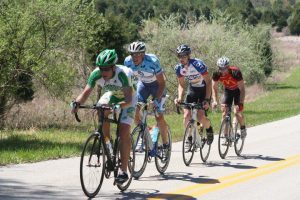 Attack when it hurts

If you have been keeping up with the main group or the break away group then the likely hood that you are the only one hurting is probably pretty narrow. This is a great time to attack. More than likely everyone will require the same amount of time to recover. You won’t see this happen much in amateur ranks but Pros are known to attack right after attacking! The element of surprise plays a big roll in attacking successfully.

Lead out an attack

Often when teams are well organized and bunch together at the front of the peleton this is where one rider can jump off the front hopefully only with one teammate in tow and sling shot them out further and faster than if they were doing it all by them selves. Teams that are smart won’t allow this to happen by simply not allowing to many teams to organize at the front of the peleton. There is also the threat of this happening off the back or the middle of the peleton but it can be tricky to execute due to road constraints or team communication. You know, the guy who yells out what everyone is doing. 🙂 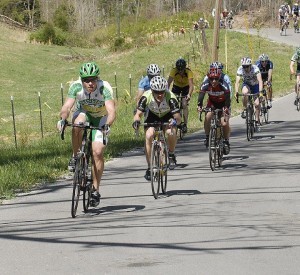 Not really sure this one counts as an attack but it can still serve to wear out other riders. When a rider finds themselves rested and drifting to the front and the pace slows down to the point of frustration especially on a down hill section go off the front at speed faster than the peleton. They may or may not try to bring you back if you have legs attack again and begin your time trial.

Surges aren’t really attacks but I thought I would mention them because they serve some of the same purposes. Primarily weakining riders and limiting field sizes. Surging needs to be done from the front of the peleton and it needs to be done with out telegraphing it. To do it you just want 2-3 revolutions of your spin to be a bit more powerful then the last 2-3 revolutions. DO NOT do this more than a few times, you can wear your self out. What happens is that this effort is magnified ten fold in a large peleton and has an accordion effect to those in the last third of the peleton. This accordion effect requires those in the back to work much harder than those on the front to hang on. In lower category races this happens in most road races with out actually trying! 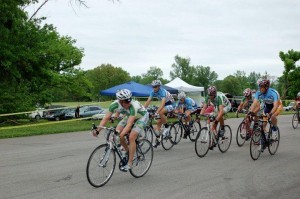 Attacking in out of corners

The tactic of attacking corners is very effective psychologically in Road Races but especially Criteriums. When approaching a corner sprint away from the front into the corner then sprint again out of the corner. The goal is to get threw as many corners as you to where the peleton can no longer see you (Out of sight out of mind). To be truly effective using this tactic you need to have a teammate/supporter not racing call out the time splits so you know if you are working to hard or not hard enough. You will know if your attack is leading to a successful break away when you time splits hold or the announcers tells you that you are about to lap the field.

Thanks to my teammates of Main Street Velo for offering up shots from various races this spring!