Positive Performance athlete Tim Gibson of Australia contacted me at the end of last season and told me he wanted to climb some mountains and not just any mountains hew wanted to ride his bike in the Alps. My first thought was that is very cool. The second thought was I wish I could go! Tim and I discussed his cycling goals for the ride and others along with his training objectives, tested to discover his strengths and weaknesses. We created Tim a plan that would take him from a coastal rider to a cyclist capable of riding the same Cols that Tour de France Pros ride. Below is Tim’s ride report for his epic mountain ride. Please leave comments and congratulate Tim on an excellent ride! Coach Rob 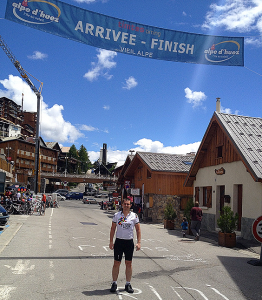 I had been riding for a couple of years recreationaly. After completing a few organized rides here in Victoria, Australia, I decided with a couple of friends that we needed some bigger challenges. What better challenge than a Tour de France experience? We found what seemed to be the perfect opportunity with a Lake Como, Italy to Nice, France trip through the Alps, taking in 1,100km and 10 mountain climbs in 10 days of riding, and camping along the way each night in tents.

My training started in a somewhat haphazard way, some road riding combined with a couple of nights a week riding the trainer in front of the TV. I realized that I wasn’t getting much improvement from this and looked around for different training options. A search of the internet found Rob Grissom at Positive Performance coaching. What really attracted me to Rob was the fact that the plan could fit in with the rest of my life and I wasn’t tied to set times to meet up with a coach for training.

I contacted Rob via email and after advising him of my current training regime, cycling goals and events to be trained for, Rob uploaded a daily training plan to Training Peaks website. The plan was broken down into phases to build up to the main event. I tracked my progress daily using my iPhone with GPS and speed/cadence sensors and HRM, allowing Rob to evaluate my performance throughout the training program. We caught up over Skype regularly to manage any changes required and to keep the motivation levels up.

After around 8 months of training, it was time to pack up the bike and catch a plane to Italy to begin our odyssey. The journey was to take in 10 mountains, all having featured in the Tour de France over the years, including Col du Grand St Bernard, Col de l’Iseran, Col du Telegraphe, Col d’Galibier, l’Alpe d’Huez and Col d’Izoard.

The scenery along the journey was stunning, with snow capped peaks looming up on the horizon, increasingly getting bigger and bigger as we rode closer. The realization that we would have to climb all these peaks was daunting. Physically, the ride was tough. Mentally the ride was tougher. The accumulation of miles, day after day, put doubts into my mind as to whether I would be able to complete each day. After around day 5, I was mentally shot, looking for excuses as to why I should stop and wait to be transported to the campsite in the tour bus. Halfway through the day I succumbed, and pulled over. During the hour drive to the campsite, I had time to reflect on my purpose for having attempted this trip in the first place. Did I want to sit on a bus and watch other people have the holiday of their lives? Or did I want to push myself as far as I could and build up a set of memories that would last me a lifetime. Luckily I chose the latter and finished the trip in a much stronger frame of mind than what I had started, digging deep through each climb and never looking for excuses.

All in all, this was definitely a positive experience. I am extremely appreciative of the assistance I got from Rob at Positive Performance Coaching and highly recommend his services.