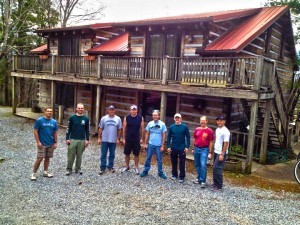 Well our very first training camp is behind us! A total of 12 cyclists converged on the Smoky Mountains from Arkansas, Michigan, West Virginia, Kentucky and Tennessee to learn quite a bit about group riding, pace lining, bike handling, climbing and descending.

So what goes on in a training camp? That’s easy, having fun, lots of riding, learning, eating, and meeting new people is what happens at a PPC training camp! So before I begin with the specifics of the camp and what we accomplished as a group I thought I would share with you some of the reasoning behind the camp and it’s organization. 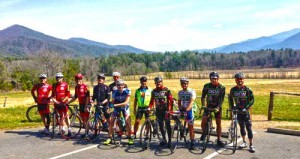 Coaching was even a business. I know as a coach in order to grow my business in the hopes of one day becoming a full time business owner I will need to do more than just coach individuals. I also knew as the sponsor and coach of a development cycling team I needed to have the team review and learn some foundational skills. So I felt that after 2 seasons it was time to host a camp and not just for the team I coach. I opened the camp at first to just athletes I coached and was really excited when so many wanted to attend. I then decided on how many people I could realistically manage at a camp, set a date and booked a lodge for all of us.

The above is a bit over simplified but its pretty close to how it all came together. So let’s talk camp! 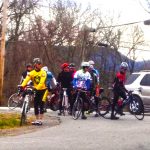 Most of us get to the lodge early to get in a cool easy ride before the official kick off. I quickly decided on the way out that the ride needed some guidance and it turned into a clinic on group riding etiquette, pace lines and bike handling. The return trip back to the lodge was 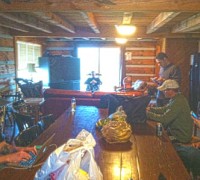 impressive. I would of thought that the group had been riding together for years! Pace lines were smooth and communication was fantastic! When we returned it was to late to get another ride in so instead we waited for the arrival of the rest of our campers, set up shop in the lodge, swapped stories and made plans for dinner out in Pigeon Forge TN.

On our second day we reviewed everything from day 1’s clinic on group riding etiquette, pace lines and bike handling. Then we covered Climbing and Descending skills because this would be a day of two climbs for many of us. We all walked down the hill from the lodge and hit the road at the base of the mountain. We proceeded to ride to Cades Cove on an easy steady

climb and a loop around Cades Cove. The group did very well and handled themselves like pros on the climbs and dealing with park traffic. I was also very impressed with descending skills of all of the campers. 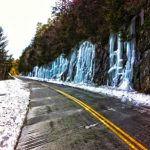 We made it back to the lodge for a quick clean up and some refueling and went back out for one of two rides. Campers had a choice between a recovery ride or a shorter steeper climb up part of the Foothill Parkway. Tony Young, a long time PPC athlete, was my assistant at the camp and he guided several on a recovery ride while I and several of our campers climbed as much of the Foothill Parkway as we could before we started loosing light.

I had also prepared to talk about several topics that were important to the campers and on Day 2 we covered Performance nutrition. I also spent some time talking with individual campers about logging data, power meter selection and looking at data using some of the premium features in Training Peaks. Look for webinar on Performance Nutrition soon!

Our discussion on Performance Nutrition happened right after a dinner prepared by several of the campers and teammates. We dined on baked spaghetti that was covered in Venison meat sauce. Wow was that amazing! 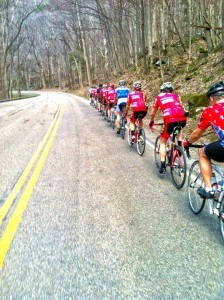 Saturday’s weather was perfect in the valley and in the mountains so the decision was made to climb Clingman’s Dome instead of the Foothills Parkway. The distance to the top of the Foothills parkway is about 14 miles and includes almost 13 miles of climbing. Climbing to the top of Clingman’s dome from the Visitors center is about 22 miles of non-stop climbing! The grade to the top was never ridiculous. We did have a few steep pitches but nothing to drastic. We did suffer the road conditions going up Newfound Gap. We had several tires that had issues with the rough conditions. In total we had one tire replaced on the way up and two once we completed our descent. Total time to ascend with breaks making sure everyone caught back on with the group took a total of 3 hours and change. It took just under an hour to descend! The road down from the top of Clingmans was damp but clean and amazing to descend. The descent down Newfound Gap was a bit trickier but nothing that we couldn’t handle after our clinic on descending!

So we headed back to the lodge to relax get cleaned up and prepare for another couple of topics and dinner. We spent considerable time hanging around outside and in front of the massive outdoor fireplace, especially at night.

We talked about Flexibility, Rolling and Recovery, Posture and Bike Fit as well as Time Trial bikes and Time Trial bike technology. I will also be having webinars on these topics too.

Dinner was an amazing assortment of vegetables and wild game! We had ELK and Venison! Remind me to make sure hunters come along for the next camp!

We were not able to squeeze in an easy ride liked I had hoped on the last day but we did talk quite a bit before working as a team to pack up and pick up. We talked more about power meters, wheels, bikes, performance data collection, coaching and training plans. I am sure I have missed a few things we discussed because it was non-stop from sun up to sun down!

I have received several questions form campers and those who wanted to attend but couldn’t make it so I have set up a FAQ below.

But before I jump into the questions I want to thank everyone who showed up for the first PPC camp and to everyone who helped make it a success. Special thanks to Tony Young for assisting on rides, Rusty Barrett, for being the Grill Master, Andrew and Bill for the killer Spaghetti and everyone who made side trips to the grocery. Pretty much everyone who shared their photos for this article and Facebook posts.

So will we be hosting more training camps?

You can bet on it!

How long will camps last?

How much will camps cost?

Our inaugural camp had two prices. One price for those that we coach and one for the general public. This years spring camp was super cheap since it was the first one. Future camps will range from 300.00 – 700.00 for each participant depending on location, number of participants and length of the camp.

What does the cost cover?

The cost of the camp covers lodging, materials and in future camps, meals. The cost may also cover some local transportation and items like camp t-shirts, caps and or jerseys. The fee also covers the cost of coaching services in the field and the coach(es) and camp staff’s own travel and lodging expenses.

Will you host a camp just for our team or club?

I sure will. Just email me and let me know the dates and particulars you have in mind.

Where will you host your camps in the future?

We will be back in the Smoky Mountains for sure but would also like to host a camp in the Caribbean next season too! We also hope to host more camps in Kentucky and surrounding states but have no problem traveling to set up camps.

Are your camps just for cyclists?

No not at all. We will also be holding camps and clinics for multisport athletes and runners in the future!

I don’t think I can afford to go to one of your camps. Do you work with athletes one-on-one or just for the day in a group setting?

We will also be hosting one-on-one coach rides and or one day or weekend clinics. Our first clinic of the year is coming up. We will be hosting a Time Trial Clinic in May. Watch our events page for details and registration

If you have any other questions about our camps or clinics email us!

Until next time Train Smarter NOT Harder!